Why was waterboarding picked for SERE, and not others? I agree with your argument about taking prisoners in time of war especially after watching “The War” by Ken Burns. My intention with the family-in-imminent-peril analogy is merely an attempt to whittle down the debate to a more digestible morsel. No one will dispute that your “self” may extend to her. There may be non-coercive ways to address resistance, says Borum, which could be applied to an interrogation setting.

No one will dispute that your “self” may extend to her. The goal of these people is to destroy us and our way of life, by ANY means neccessary. The use of torture lawyers and writing new memorandums has allowed the government to get away with these terrible interrogation tactics. You must realize that we are not dealing with a conventional enemy, whose only desire is to do immediate harm to other soldiers on the field of battle. Evans, Oh for crying out loud, save the whole “You don’t know what it’s like in the rest of the world” bit, would you?

Because at this juncture, after Abu Ghraieb and other undignified exposed incidents of murder and torture, we appear to have become no better than our opponents. All the high-minded rhetoric in the world wont make a lick of difference if you dont convey them in action.

It reflects a basic disregard for the law of the United States, the Constitution and basic moral decency. As the death penalty illustrates, note essaay popularity does not contradict abhorrence.

This might then justify the torture of war ppersuasive when one’s country is under attack, thus losing the classical distinction between jus ad bellum why one may go to war and jus in bello how one may fight a war. Therefore, first, the argument would need to appeal to self-preservation and not self-defense; second, this in turn would crash against the accepted legal doctrine that bystanders, even guilty ones, may not be hurt intentionally.

Our way of life, right? We admittedly have our shameful moments, especially in times of war. The former director of a prominent dssay rights center at Harvard writes of the judicious use of sleep deprivation, hooding, and targeted assassinations; he concedes the government’s need to “traffic in evils.

Waterboarding is Torture – Outside the Beltway. What were the specific criteria used when selecting the specific methods that would be used in SERE? I don’t think it legitimate to wave away what the Japanese planned to do to Allies POW’s by dismissing them as a “death cult”. If this were a discussion about victims, then you would see concern about victims.

As fanatical or watergoarding indifferent as any Christian here in the US. 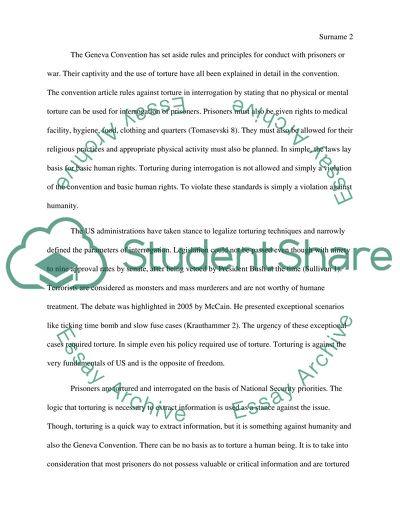 As Forrest Gump might say, “evil is as evil does”. Evan Wallach wrote a brilliant history of the use of waterboarding as a war crime and the open acceptance of it by the administration in waterboardnig article for Columbia Journal for Transnational Law.

The defenders of torture do not display those characteristics. The lesson from these men is to resist as best you can without getting killed. But what do we do when we encounter an enemy that clearly does not value human life, and that continues to attempt to inflict death and suffering on a massive scale. Trying to find one instance in which tortures ends justify the means and then making the claim that, “Hey, torture is okay after all. Every time they were used, the detainee would clam up as they were scared that anything they said would make that pressure increase.

But we are fighting against men who use brutal tactics.

This enemy is more evil, more brutal, more intelligent, well funded, hates us more, etc and etc. There is no evidence of a similar moral duty owed to citizens by employees of our government. The answer is simple, and black and white.

As Persuasiive stated in my last post, torture is really about punishment, humiliation, and control. We know, for example, that successful persuasion rests on the reputation of the person doing the persuading.

Ben Soud, for unexplained reasons, is referred to as Abd al-Karim in the Senate report. His point was that ethical codes are dressed up as advisory devices when in fact they serve only justificatory purposes.

However, if you are unwilling or incapable, if you lack the moral courage, of accepting this responsibility” This nails it. Evans, people convicted of rape and torture are persuasife kinds of people who would slash your throat – persuasibe we don’t torture them.

Torture by another name: CIA used ‘water dousing’ on at least 12 detainees

Many waterboard team members, even in training, enjoy the sadistic power of making the victim suffer and often ask questions as an after thought. The vigilant reader will immediately spot the self-referential implication but I’ll leave that one for another day.

Nance, have you ever considered how you would respond if members of your own family were kidnapped and held by terrorists?

To make a truly effective argument against all forms of torture one also needs context, because the rest of the world isn’t going to stop torturing people just because we do.